Last month, PayPal announced that its users would be able to buy, sell, and hold four prominent cryptocurrencies – Bitcoin, Ethereum, Bitcoin Cash, and Litecoin – via Paypal.com. Through its website, users will be able to buy and manage their cryptocurrency in one place.

Globally cryptocurrency has quickly been growing in popularity as an alternative form of currency since its inception in 2009. Cryptocurrency, as the name implies, is a digital form of currency that is meant to take the place of, and function as, a real form of currency. Unlike traditional forms of currency, nothing physical exchanges hands, and its value is not backed by a bank in the same way most modern currencies are. Instead, users hold their “currency” in digital wallets and make all their transactions digitally, with the vast majority of cryptocurrency being backed by their communities.

The “currency” in cryptocurrency, usually referred to as tokens, is a unique string of numbers and letters that is tied to the specific cryptocurrency being used. While in a traditional transaction users would exchange money, cryptocurrency users exchange tokens. When users trade tokens, the transaction is sent to a continuously growing list of transactions called a blockchain. The transactions added to the blockchain are then verified by users through a process called mining. Users’ work for mining does not go unrewarded and the “miners” are rewarded in tokens for each successful transaction that they verify. 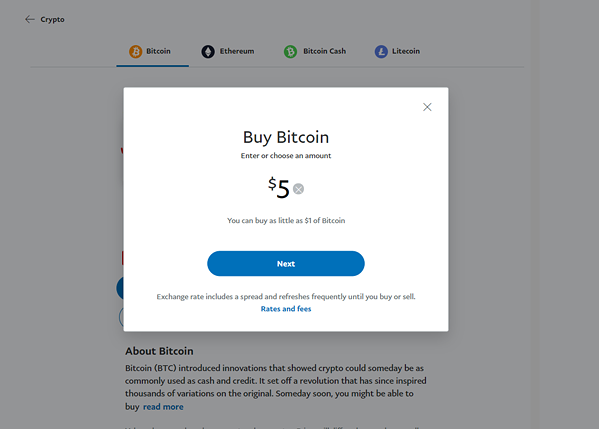 Due to the various steps and knowledge needed to jump into the cryptocurrency world crypto had long been pursued by few. As the popularity of cryptocurrency began to grow in early 2018 websites began popping up advertising easy ways to buy and sell crypto but PayPal is one of the largest and most recognizable names to join the cryptocurrency wave.

I tested out PayPal’s new crypto service, throwing in $10 for the opportunity to play around with buying and selling. For someone that has never bought cryptocurrency, the entire process was quick and easy. Within minutes I was the proud owner of $10 worth of Bitcoin and Ethereum. 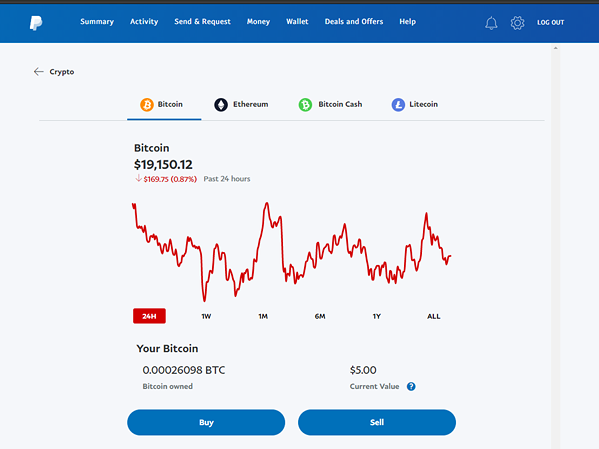 After setting up my account, I was presented with a screen showing my present balance, as well as guides explaining the ins and outs of crypto. For someone less familiar with the technical aspects, the guides were helpful and gave me a better understanding of where my $10 had gone. They also assured me that the prices would rise and fall naturally depending on the current exchange rate of my specific currency.

The move to PayPal has made breaking into the cryptocurrency sphere a reality for the average person. It’s cool and an easy process, and PayPal recommends investing just a dollar to play around with it before making more rash decisions. Though it may not be the most feasible way to diversify your assets, PayPal’s expansion into the crypto market is a great way for the average person to jump into the world of cryptocurrency.

DBS Bank cryptocurrency exchange about to be launched | Crypto

Why is Bitcoin the Most Trusted Cryptocurrency? - Read to Know | Info4u

Why is Bitcoin the Most Trusted Cryptocurrency? - Read to Know | Info4u

Invested Your Stimulus Check in Bitcoin? Here’s Its Value Today